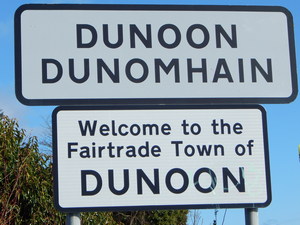 The church was formed in May 1843 as a result of “The Disruption”, a national event, when half of the ministers and elders left the Church of Scotland at the General Assembly to form the Free Church of Scotland. A similar outcome occurred locally when Rev Dr Mackay and his Dunoon Free Church purchased land fronting Argyll Street where they built a small wooden building known locally and affectionally as the “Bothy Church”.

In less than a year the spirited congregation erected a relatively small stone building which remained their place of worship for just over 30 years. The bell, cast in 1844 (cost £54), was transferred to the new Church in 1877.

The memorial stone of the building was laid on 22 July 1876 by Mr Alexander Stephen of Linthouse (shipbuilders). The new church in Gothic revival style opened on Sunday 12 August 1877 the architect being Robert A Bryden who also designed the adjacent Burgh Hall. The final cost of the main building was £13,270 with a further £1265 for the Normandy Gothic tower and spire. The hall and kitchen were added in 1890 at a cost of £900.

A Free Church school, Dunoon Academy was built behind the church on the land now occupied by Hanover Street car park.

A mission hall in Argyll Road was constructed in 1881, the building still exists as a private dwelling house.

Within the church two rows of delicate cast iron pillars divide it into nave and aisles and support the gallery on 3 sides of the building and the high arched roof with its rib mouldings and decorative plasterwork.

The large pulpit is accessed by a set of stairs in each side. The pulpit’s central position deliberately emphasises the centrality of the preaching of the Word.

Originally two services were held each Sunday one being in English and the other in Gaelic. Praise consisted of unaccompanied singing of the Psalms.

After a vote by the congregation a two manual and pedal pipe organ by J Brook and Co., Glasgow was installed in 1895. This was enlarged to a three manual in 1922 and the instrument remains the largest and most versatile pipe organ in Cowal. At the same time the pulpit was brought forward and the elevated choir stalls created.

The Communion Table incorporated the Great War memorial with a plaque inscribed with the names of the fallen members of the congregation. The World War 2 memorial is a stained glass window designed by Gordon Webster in front of which is placed a memorial plaque.

Three windows have been gifted by families within the congregation: Lauder memorial (1927), Paterson memorial (1933) and Stewart memorial (1960).

With the union of the Free Church and the United Presbyterian Church it was decided in 1900 to name the church “St John’s United Free Church of Dunoon”. In 1929 the union of the Church of Scotland and the United Free Church took place, the church becoming “Church of Scotland, Dunoon: St John’s”.
In 2000 the building was “A” listed by Historic Scotland. Professor John Hume who regularly contributes articles in church building in “Life and Work” has included St John’s in his book “Scotland’s top 100 churches” and considers the building to be “in the top 20 Victorian churches in Scotland”.

Together we can worship God and help those in our Community who need assistance. To get in touch ….
Contact Us